Johannes Kreidler, a Berlin based conceptual artist, likes to be present in the medias and often works on political and social topics. In doing so, he also deliberately stirs up controversy time and again. Since 2020 he teaches composition at the Basel University of Music (FHNW). At the upcoming Donaueschingen Music Festival, he will present a humorous film composition dedicated to otherwise neglected aspects of contemporary music. A portrait by Cya Bazzaz.

Cya Bazzaz
Anti-Corona-Demo – Rosa-Luxemburg-Platz Berlin – 16 May 2020. A dangerous cocktail of more or less right-wing activists gathers to protest and demonstrate against the government’s Corona measures, accompanied by a sound with which the conspiracy ideological community apparently bases itself on ancient myths. As all this wasn’t bizarre enough, in the midst of it one can also find a very special artist, who knows how to put himself in the limelight and make him and his content be heard: Johannes Kreidler, composer, media and conceptual artist.

His demands are: end the economic growth obsession, a fairer distribution of wealth, ecological and sustainable agriculture. This time of standstill should be used to direct energies sensibly to where the real opportunities lie and not get caught up in abstruse ideas, Kreidler claims.

Kreidler’s works essentially belong to the so-called ‘conceptual music’. As in conceptual art, the focus lies just as much in the concept or the elaborated idea as in the artistic result itself, Kreidler usually incorporates multimedia processes into his work.

As one of the few composers, Kreidler has critically participated in the social discourse since the beginning of the pandemic. On social media, for example, he commented events like the high demand for toilet paper, conspiracy theories or simply current political affairs in a mostly ironic and humorous way, often mixed with musical allusions.

He often exaggerated the arguments of the conspiracy mystics in his posts or even reversed them, creating some kind of ‘competitor narratives’. 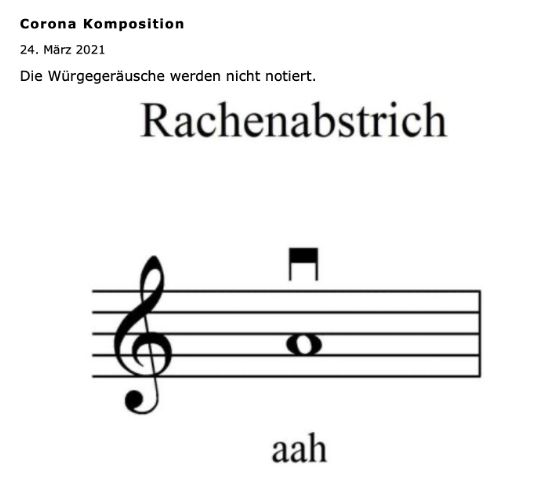 “Scientific Sonification as an artistic method.”

In addition to political activism, Kreidler also addressed this crisis in artistic or artistic-pedagogical terms.

One of the methods he uses in dealing with political as well as social issues is ‘sonification’. This method, which originates in science, serves to represent or create sound out of abstract data by precisely assigning individual musical elements. Trough scientific sound approach Kreidler creates a hybrid form of music making, by combining acoustic visualization with aesthetic interpretation.

In his course “Theory and Aesthetics of Electronic Music” at the FHNW, Kreidler used this compositional technique as a basis to develop various so-called “coronifications” in a joint project with his students. These were finally presented online.

In the Basel course, Kreidler also addressed the question of the extent to which it is morally adequate to aestheticize the data of a crisis, as in the case of the Corona pandemic. His conclusion: listeners should form their own, personal judgement.

The way Kreidler dealt with purely scientific dry data in this project was not new to him, as he had already dealt with matters like the stock market crash or the Iraq war in his “Charts Music” in a similar way. He used software to elicit harmonic melodies from the drastically descending stock market curves or the increasing number of deaths of US soldiers in the charts, or he drew exact points into the diagrams with a graphics program which he then transferred into a traditional five-line system in order to convert them into notes and sound. The result is a three minutes long music video, a chart medley in ringtone style.

Kreidler also expressed his views on the above methods in theoretical treaties, as dealing with such issues is of particular concern to him as composition professor at the Hochschule für Musik Basel (FHNW). As a kind of manifesto for his teaching, he published the text “The composition class as an aesthetic think tank” in the “neue musikzeitung”: “In terms of the program, it is now crucial for us artists to assert ourselves in the face of the political: to bring artistic freedom, internationality and global awareness, historical consciousness, a sense of possibility and aesthetically challenging things back into society again and again,” says Kreidler.

The crisis also inspired Kreidler to compose new works. In the spring/summer of 2020, he created “Music-19”, a series of graphic scores that are to be interpreted musically.

The line-up is completely free to choose and acting, objects as well as video can also be integrated. During the performance the respective graphic scores should be visible, for example by projecting them on a wall.

On social media, Kreidler called on followers and friends to interpret, record, and publish these graphs.

In his “think tank” theory, he writes: “Develop the foundations of the musically possible, intervene in the whole, contribute to make the world more beautiful place. Even the smallest work counts, just like in democratic elections where every vote counts.”

What does Kreidler’s approach mean for the art music scene?

According to Kreidler, musicians and artists should not only reflect on social processes, but also actively participate in shaping them. This is the way they have a chance of future survival, without being relegated into the unworldly and elitist. His energetic consistency and creative force fascinate me especially now, during the global pandemic. Kreidler will, I hope, prompt some artists to radically rethink their approach.
Cya Bazzaz

Cya Bazzaz studies composition and piano at UDK in Berlin. After a guest lecture by Johannes Kreidler at UDK, he has been intensively involved with his work.

Johannes Kreidler is professor for composition at the Hochschule für Musik Basel (FHNW) since 2019/20.