Basel Sinfonietta’s next concert will be dedicated to Heinz Holliger’s 80th birthday and on the same occasion, neo.mx3.ch – the new SRG platform – will be launched in the German-speaking part of Switzerland.

Thomas Meyer
The third seasonal concert presented by the Basel Sinfonietta, directed by Peter Rundel is entitled “Tausendsassa” (Jack-of-all-trades), referring to Swiss composer, oboist, conductor, pianist, etc. Heinz Holliger, whose role and contribution to Swiss music has been decisive over the last six decades. Here is not the place to present our readers the list of the many achievements and qualities gained by this musical personality, from his excellent interpretations to the instrumental inventiveness (the oboe sounds different after Holliger) and compositions, not to mention his enthusiasm for his colleagues and for literature. There wouldn’t be enough room anyway.

I would rather like to emphasize – as a personal reminiscence – the unconditional, fervent passion with which this full-blooded musician engages himself. I first met him when I heard his “Siebengesang” many decades ago. From the first note of the oboe, one remains pervaded by this composition, which has considerably changed over the decades, but without losing its intensity.

After his 80th birthday in May, Heinz Holliger has been honoured in many ways and places and never lost the occasion to support music by accepting the awards and tributes. The Basel Music Academy is currently focusing on Holliger, although he never permanently studied or taught there and numerous events are scheduled until March 9, while the Vera Oeri Library also houses a highly informative exhibition about the musician.

His music is now appearing in several facets at the Basel Sinfonietta as well. On one hand, the composer with his orchestral piece (S)irató from 1992, on the other hand the composing interpreter with two Liszt transcriptions, in which Holliger did not simply orchestrate late piano pieces, but so to speak, continued composing them into the orchestra. In his own words: “an attempt to “push” (transcribe) these two enigmas of the late Liszt – who stand like erratic blocks, but also signposts into the unknown of the late 19th century musical landscape – into my own way of communicating, thinking and so to speak retrieve them from my subconscious”.

All his life, Holliger committed to the music of his colleagues, commissioned and/or conducted new pieces. Thus, the orchestral work “Tenebrae” by Klaus Huber, who died in 2017, will also be presented.

In addition, a very recent piece by German composer, pianist and singer Steffen Wick: “Autobiography” will be performed for the first time in Switzerland, commissioned by the Basel Sinfonietta. The composition aims to describe that moment in which a whole life, condensed, passes by.

Launch of neo.mx3 in the German-speaking part Switzerland

An excellent opportunity to present neo.mx3.ch – the new Swiss platform for contemporary Swiss music – which SRG has launched as pilot project in 2019.

Neo.mx3.ch offers an overview of the current composed and improvised musical landscape of the entire country, but also covers international events with a connection to Switzerland, such as the recent premiere of Olga Neuwirth’s opera “Orlando” in Vienna with the participation of Swiss percussion soloist Lucas Niggli. A place for previews, portraits and debates, but also for discussions via the neo-blog, moderated by editor Gabrielle Weber. In addition, musicians, ensembles and cultural institutions can present themselves in sound, video, image as well as text.

At last, because neo.mx3.ch finally closes a gap that had been lingering in Swiss music since quite a long time. Save the date in your agenda and get ready for a big surprise, for we will not yet reveal what is planned on February 2, for the official Swiss-German launch.
Thomas Meyer 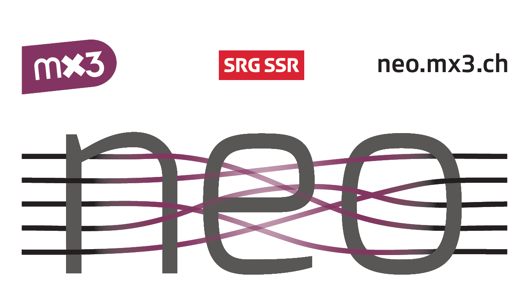 We are very much looking forward to your comments on the neoblog regarding text, concert, neo.mx3 launch as well as the Holliger series on SRF 2 Kultur!

Olga Neuwirth’s ‘Opus summum’ Orlando is in the home stretch at Vienna’s Staatsoper, taking an institution known for being rooted in tradition on two new ventures. For the first time in its 150-year history, an opera has been commissioned to a woman and the Staatsoper shows commitment to a diverse society. Neuwirth tells Virginia Woolf’s story of a journey through time and gender over centuries up to the present day.

Gabrielle Weber
Lucas Niggli is involved as percussion soloist and reports directly from Vienna on translating the story into music as well as on the interaction with the Vienna Philharmonic Orchestra.

“Orlando is a huge work transcending all genre boundaries, a very big spectacle and it is remarkable that something like that can be realised in such a traditionally oriented Opera house, especially in this day and age”. It needs a great deal of nerve and commitment, because the orchestra is very challenged. “Such a visionary piece of work cannot be consumed without friction, like some kind of fizzy powder drink. It requires hard work.” The second violins are microtonally tuned 60 cents lower for instance. The Vienna Philharmonic Orchestra is not used to such things, which create a great richness in colours though. “It is a real pleasure to listen to,” Niggli says enthusiastically.

Niggli plays in costume for three extended sequences and is pushed on stage on a carriage together with his drums. Neuwirth wrote the drum part with drum-specific skills, alternating between “moments of freedom, big-band-like kicks and razor-sharp passages”. The interplay with the Vienna Philharmonic is particularly challenging in the sequences in which he doesn’t find himself playing in the pit, as “the Philharmoniker are famous for their laid back playing, while I am usually very focused on the downbeat”.

The extremely modern plot portrays a personality that – in the character of Orlando – has completely changed over the centuries, also in terms of gender.

How is this translated into music? In Neuwirth’s story, Orlando also becomes a mother – her child is given by the queer singer-performer Justin Vivian Bond.

On the other hand, Orlando’s journey throughout the centuries is expressed with blunt and cheeky music history quotations. “There are quotes from Monteverdi, Rossini, Stravinsky to Lady Gaga and a nice passage where I’m allowed to improvise with an electronic sample,” explains Niggli. Neuwirth has precise and courageous ideas about the combination of musical genres. “She almost performs a genre-bending in parallel with the narrative gender-bending: Neuwirth’s music is a bit like chewing gum: very elastic, but still cohesive.”

Drums, electric guitar, wind instruments, sometimes jazz brass instruments play an important role also in other works by Neuwirth. “This is why she also composed a solo part for jazz percussion in this ‘Opus summum’, as she defines it herself. This is how I got this great, exiting assignment.”
Interview Annelis Berger, 2.12.19

“For it is a love of oddities, of the paradoxical, the grotesque, virtuosity, exaltation and exaggeration that are the essence of this fictional biography, which aims to create a new morphology of a narration which is in a constant flow to create a fluid form. At all times it is also about (…) a sophisticated and highly subtle form of sexual attraction that rejects being pigeonholed in any one gender. As well as about refusing to be patronised and treated in a condescending manner – something that continually happens to women, with no end in sight” (Olga Neuwirth).

The performance of 18 December 2019 will be live-streamed on WIENER STAATSOPER live at home worldwide in HD.

Charlotte, in your performances you push the boundaries of your instruments – viola and voice – to their limit, adding a strong combination with visual aspects. Can you tell us more about the connection between these three elements?
Solo work is an important starting point for me, but I am always in a state of dialogue. The voice and the viola communicate with each other. They often disagree. To me, music is about being in communication with people.

“The viola and I are looking for new dialogues day by day.”

The connection to the visual aspect is something I achieve through the so-called “Son-Icons”, a combination between music and image (or Sounds and Icons). I capture the music I perceive  – whether heard or imagined – as well as random ambient sounds with my hands, like several pens dancing with each other on semitransparent paper. The results can be small picture boards, meter-long paper sheets, room installations, animated video scores. With Son-Icons I created a composing procedure.

The Son icons are stimuli and inspiration for music and make the energy of its origination visible.

Improvisation is an important foundation of your work. What does improvisation mean to you?
Improvisation is an artistic elixir of life, especially the magic of musical encounters with other artists such as Lucas Niggli (CD Fulguratio). Improvisation means creating in the moment. When I play with the London Stellari String Quartet, which I founded in 2000 (CD Vulcan), every performance leads to new creations. The London improvisation scene has influenced me heavily for almost twenty years. First as permanent member, now as guest and guest conductor, I regularly played with the London Improvisers Orchestra (CD 20th anniversary).

On the basis of this interaction-notation you developed, you elaborate intermedial compositions for orchestra and choir. How do these collaborations concretely look like?
I draw an individual Son-Icon for each musician. It can be turned and reversed, mirrored, read as “Krebs” or “Umkehrung”, on the same principles as J. S. Bach’s or the Second Viennese School’s compositions. I then hold individual coaching sessions and every musician develops his or her own musical material based on the Son-Icon.

The Interaction-Notation is a structuring method. An interface combines conventional western notation, Son-Icons, graphic notations, movement symbols, or plays live recordings. This creates the framework condition for musicians with different cultural or interdisciplinary backgrounds to interact with each other.

How do you work as a conductor in intermedial settings with larger ensembles?
I see myself as a giant ear. I create an ambiance and a state of trust and acceptance, so that courageous things can happen. If routine creeps in, I stimulate awareness through the unexpected.

The new Son-Icons CD features intermedial compositions. How can this connection between visuals and sound translate to a “sound-only” medium like the CD?
An intermedial performance on stage is a celebration, an immersive sensual experience one can dive into, a state of aggregation. But Son-Icons do also work in exhibitions as “visual music” without sound. They awaken inner music.

On the other hand, as recordings don’t carry any visual impulses, the music awakens the listener’s inner images. The advantage of a CD is that you can take it with you, listen to it on your own, play it again, immerse into it more than just once.

“Music and Son-Icons are self-sufficient – they act as different states of aggregation.”

Tell us about your upcoming projects, do you have a dream project?
In my solo work I am mainly researching with live electronics, particularly focusing on the alchemy and connections between analog, digital and the body.

On the other hand, there is this coming together of Son-Icons with scenic-intermedial elements as well as dynamic musical dramaturgy   have in mind – perhaps some kind of “commedia dell’ascolto intermediale interculturale”…Interview Gabrielle Weber